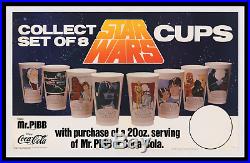 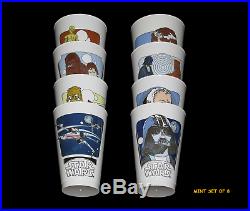 MUST HAVE STAR WARS! 1000X RARER THAN THEATER ONE-SHEETS! Offered here is one of the RAREST and best cross-over collectables related to Star Wars – A 1977 Mr. Pibb / Coca-Cola Advertising Poster for an early set of Star Wars Collector’s Cup Premiums! ALSO INCLUDED IS A MINT PERFECT. SET OF 8 1977 CUPS. The poster in this lot is. Additionally, the design gloriously shows THE ENTIRE set of cups it’s advertising. This baby is truly among of the rarest and nicest of the early Star Wars posters, and, it’s also a stellar Coca-Cola collectible as well. Very few of these were originally distributed, and, only a handful were ultimately saved. This piece is much rarer than ANY of the movie theater 1-sheet posters issued on Star Wars – by a WIDE margin of about 10,000 to ONE! A great item for any advanced Coke or Star Wars collection. This poster is 30 inches by 18 and 3/8th inches. Originally, this poster was sent to the Mr. Happily, the poster wasn’t used. TERRIFIC VERY FINE ++ TO NearMINT CONDITION. It worked like a charm because the poster came out perfectly FLAT and spectacular! I used the best conservator in the USA. He ONLY uses high-grade materials, such as thicker linen and thicker acid-free Japanese rice paper. The better materials cost more but make a real difference in the end result. It’s flat as a pancake and as nice as can be. A finer poster display with Star Wars cups would be hard to get, maybe impossible. This poster is class all the way! I’VE POSTED A DIRECT HIGH-RES SCAN OF THE POSTER SO YOU CAN SEE HOW STELLAR IT IS! Is an accepted form of poster preservation by the Library of Congress and every Museum in the country. A lot of advanced poster buyers request and prefer linen-mounted posters because it makes framing and displaying the posters much easier – without the risk of damaging the original. The white you see in photo – beyond that of the poster – is the white of the Japanese paper lining the linen border margin. You can see how easy it would be to damage the original poster without that extra margin of protection. The backing makes the poster much safer to handle – it GREATLY reduces the risk of damaging the original. Also, all of my linen-backed posters have been stored FLAT so they DO NOT have a curl to them – They’re all ready for framing and display! If you’re looking for an investment/museum quality item. “Star Wars: The Last Jedi, ” starring Mark Hamill – in what hopes to be the performance of his lifetime – is due out for release this December. The film is already causing quite the buzz around Hollywood. Talk of an Oscar nomination is already in the air for the veteran actor as he reprises his signature role in this new large scale 21st century big-screen production. If that’s not enough, additionally, Disney is constructing the TWO (2) world record largest theme parks ever built, and both are going to be 100% dedicated to Star Wars! When that happens, this poster will inevitably be a HOT PROPERTY. Let’s face it, it’s red hot now, but it will undoubtedly become a white. Hot mamma when we round that bend. So pick it up now while it’s still obtainable. Original Music Mark Hamill…. Luke Skywalker Harrison Ford…. Han Solo Billy Dee Williams…. Lando Calrissian Carrie Fisher…. Princess Leia Organa Peter Cushing…. Grand Moff Tarkin Alec Guinness…. Ben Obi-Wan Kenobi Anthony Daniels…. Darth Vader James Earl Jones…. It can crash regardless of any decision you make and can even crash regardless of any decision made by the company related to the stock – Leaving you with a near worthless piece of paper that won’t inspire anyone! The magnificence of art and historic documents have an inherent value that relates to civilization and society. This poster/cup set is definitely. FOR MOST ITEMS LISTED. Please write with any questions. If you’re in the market for top quality original vintage movie posters or Star Wars, then please. The item “STAR WARS RARE Coca-Cola ADVERTISING STORE DISPLAY MOVIE POSTER + 1977 CUPS” is in sale since Friday, February 16, 2018. This item is in the category “Collectibles\Advertising\Soda\Coca-Cola\Posters & Prints”. The seller is “mrs.miniver” and is located in Studio City, California. This item can be shipped worldwide.
This entry was posted in star and tagged advertising, coca-cola, cups, display, movie, poster, rare, star, store, wars. Bookmark the permalink.