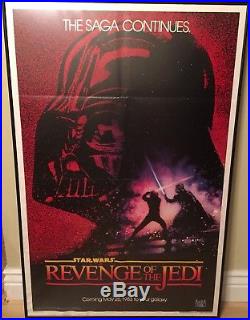 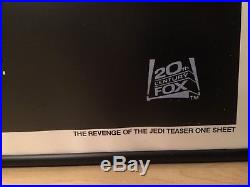 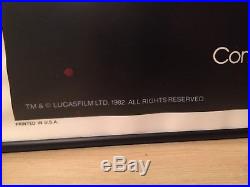 STAR WARS – REVENGE OF THE JEDI. Original One-sheet very rare! STUDIO ISSUED ONE SHEET – NOT A REPRODUCTION. EXTREMELY RARE ORIGINAL ONE-SHEET POSTER IS IN AMAZING NEAR MINT CONDITION AND WOULD GRADE A C9-C9.5. MEASUREMENTS ARE 27 INCHES BY. Crisp corners and edges. AMAZING ITEM THAT IS A MUST HAVE FOR ANY SERIOUS STAR WARS COLLECTOR. PERMANENTLY FRAME IT AND PUT IT UP… WOULD MAKE A GREAT CONVERSATION PIECE! I HAVE VERIFIED THAT THIS IS INDEED AN AUTHENTIC POSTER. I stand by my guarantee that this is indeed authentic. Obtained from a friend of a former theater manager in Texas who cleaned out an old cinema storeroom and founds hundreds of posters in there that had never been displayed… Some still in packaging from the studio or National Screen Service. Measurements and imagery are that of an original. This is the real deal! Below is a little history of this very rare poster. Revenge of the Jedi – Advance YEAR: 1982 DIMENSIONS: 27″x41″ (One Sheet) (Actual dimensions may vary slightly from this BUT any exact 27×39 or exact 27×40 IS A FAKE) VARIATIONS: Yes, one with and without the date. FOLDED OR ROLLED: Both DOUBLE OR SINGLE SIDED: Single FAKES: Yes REPRINTS: Yes INFORMATION. This is the infamous Revenge of the Jedi one sheet teaser. The art direction and design were by Bill Pate. Photographic special effects were done by Ron Sato of Satographics. Retouch illustration was done by Drew Struzan. It hit theaters in Christmas 1982. Drew Struzan talked about it in Star Wars Galaxy Collector #1 Feb. 1998 with Gary Gerani. The challenge for the Revenge of the Jedi teaser one-sheet, promoting the trilogy’s third installment before its final title was announced, was a bit more basic. “I wanted to do something a little different, ” the artist recalls. It was a simple idea, more scale than anything else: the head of Vader in a big background, with a little-bitty laser fight out in front. There wasn’t an established look to [Jedi's advertising] at that time; the styles were all over the place. So the poster stands out as a peculiar one. Note how the lightsaber colors are switched on the characters. It is something pointed out by fans to this day. There are two versions… One with a release date (above) and one without a release date (below). When the missing posters started to show up on the market for several hundred dollars Lucasfilm and/or 20th Century Fox decided to let the fan club sell the remaining print run (thought to be around 9000 total for both versions) to collectors. Today these are much sought after. The vast majority of these are bootlegs. There are at least 3 different known forgeries of this poster. The most common is folded, has a blurry Fox logo and the entire poster isn’t as crisp as it should be. Another well know forgery is rolled but was made from a photograph of a folded poster so you can see the horizontal fold lines if you look close. I would just say right now that there are not many rolled originals. Most of the originals were folded, but a few were rolled. I would be very careful (and very wary) of purchasing a rolled one. The effect of all these forgeries has been to artificially depress the price of originals, and that is bad for everyone. Remember to look at the logos and make sure that they are virtually perfect, and make sure that there are no blurred lines. Read on below to find out about a recent fake compared to an original. This poster ranks right up there with the Star Wars Mylar and Happy Birthday one sheets, as well as holding its own against the original Concert poster. If you can find a real one it is well worth cherishing. The Star Wars Poster Archive added this info on the fakes. There have been 3 major fakes of the’Revenge’ poster (not counting the 27×40 reprints). The first fake was done from a folded poster so there are fold lines in the printing. To cover this, they folded the posters so you have to look real close at the fold lines. The second was done from a rolled poster and was pretty good except the 20th Century Fox logo is fuzzy. But the 3rd fake was beautiful. It looks perfect except for one little flaw. On the original poster, the bottom right corner is solid black. The fake has a couple of little clouds. It looks like it’s suppose to be there because just above it is clouds. If you have any questions, don’t hesitate to ask. Or if you would like additional photos, please ask and I will send them to you. SERIOUS OFFERS ONLY PLEASE. Would love to sell to a serious Star Wars memorabilia fan or poster collector. The item “Star Wars REVENGE OF THE JEDI Original 27×41 Movie Poster EXCELLENT COND C9-9.5″ is in sale since Sunday, December 2, 2018. This item is in the category “Entertainment Memorabilia\Movie Memorabilia\Posters\Originals-United States\1980-89″. The seller is “theforgottenjedi1″ and is located in Hollywood, Florida. This item can be shipped to United States, Canada, United Kingdom, Denmark, Romania, Slovakia, Bulgaria, Czech republic, Finland, Hungary, Latvia, Lithuania, Malta, Estonia, Australia, Greece, Portugal, Cyprus, Slovenia, Japan, China, Sweden, South Korea, Indonesia, Taiwan, South africa, Thailand, Belgium, France, Hong Kong, Ireland, Netherlands, Poland, Spain, Italy, Germany, Austria, Bahamas, Israel, Mexico, New Zealand, Singapore, Switzerland, Norway, Saudi arabia, United arab emirates, Qatar, Kuwait, Bahrain, Croatia, Malaysia, Brazil, Colombia, Panama, Jamaica, Viet nam.
This entry was posted in star and tagged 27x41, c9-95, cond, excellent, jedi, movie, original, poster, revenge, star, wars. Bookmark the permalink.