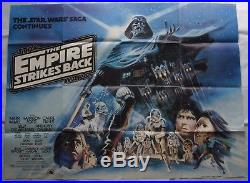 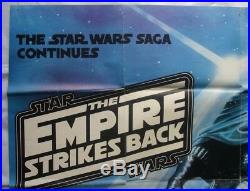 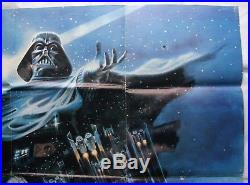 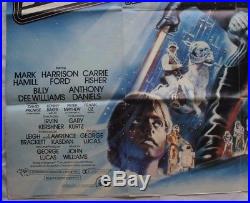 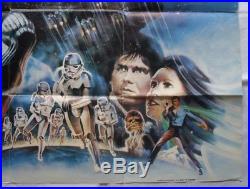 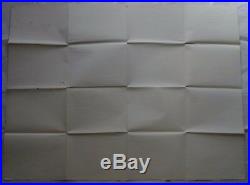 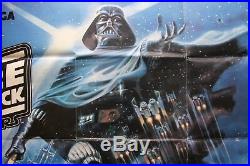 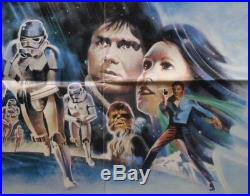 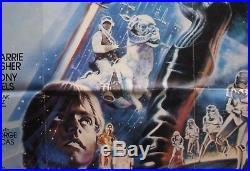 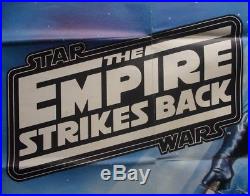 Star Wars – The Empire Strikes Back. Date: 1980 Size: British Quad (40″ x 30″) Poster Nationality: United Kingdom. 100% Original Folded’Star Wars – The Empire Strikes Back. The Empire Strikes Back (now known as “Star Wars: Episode V – The Empire Strikes Back”), the classic 1980 Irvin Kershner science fiction (sci-fi) outer space action adventure sequel (“The Star Wars Saga Continues”; based on the “Story by George Lucas”) starring Mark Hamill (as Luke Skywalker), Harrison Ford (as Han Solo), Carrie Fisher (as Princess Leia), Billy Dee Williams (as Lando Calrissian), Anthony Daniels (“as C-3PO”), David Prowse (“as Darth Vader”), Kenny Baker (“as R2-D2″), Peter Mayhew (“as Chewbacca”), Frank Oz (“as Yoda”), Alec Guinness (as Obi-Wan Kenobi), Jeremy Bulloch (as Boba Fett), and John Hollis (as Lobot). This is a British Quad poster, measuring approximately 40″ x 30″, this is the most common size for British film posters. It is single-sided, which is common amongst older film posters. This is a 1980 first release poster. It has been folded, so there is some fold wear, and light creasing. There are some pinholes around the edge of the poster, mainly in the four corners, and the middle of the top edge. There are two minor holes, one in the top right corner, and the other on the centre fold-line on the right side. Plus two very holes, one in the bottom right corner, and the other in the centre of the bottom. Any questions, please don’t hesitate to ask! The item “Star Wars, The Empire Strikes Back, Original 1980 British Quad Movie Film Poster” is in sale since Friday, March 8, 2019. This item is in the category “DVDs, Films & TV\Film Memorabilia\Posters\Originals – UK Quads\1980s”. The seller is “semiskimmedstuff” and is located in Shrewsbury. This item can be shipped to North, South, or Latin America, all countries in Europe, all countries in continental Asia, Australia.
This entry was posted in star and tagged back, british, empire, film, movie, original, poster, quad, star, strikes, wars. Bookmark the permalink.