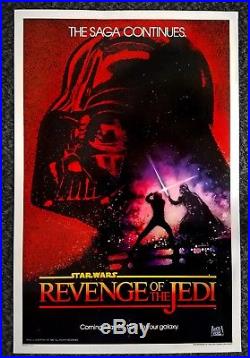 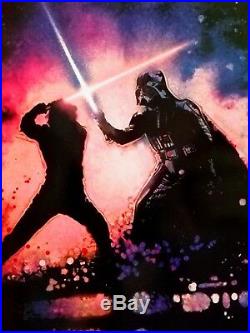 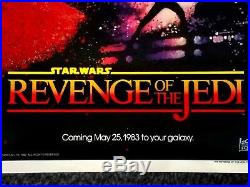 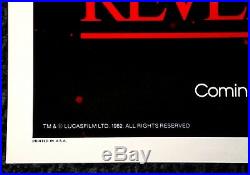 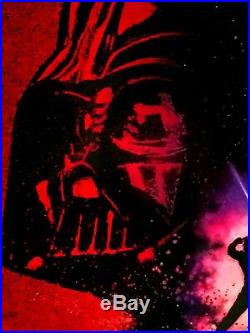 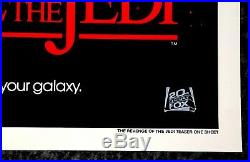 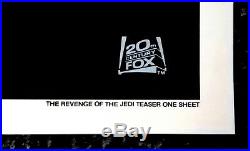 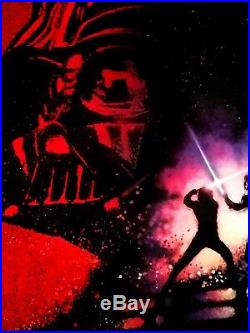 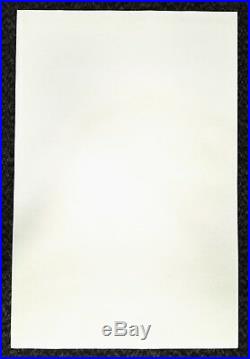 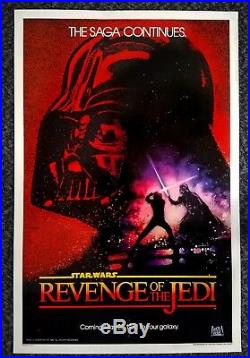 Offered is an ORIGINAL, AUTHENTIC ROLLED (NEVER FOLDED) 1983 “Revenge of the Jedi” advance one sheet movie poster (27″ x 41″) issued by Twentieth Century Fox and Lucasfilm to promote the film ahead of its release date. This was the initial title to George Lucas’ (at the time) final film in the “Star Wars” blockbuster saga. He decided to change the title to Return of the Jedi. ” Supposedly he didn’t feel “revenge would be a characteristic or quality the heroes of the saga would possess. There were two versions of this poster printed. The studio didn’t have a confirmed date for the film’s release in 1983, so that poster does not have the date/year tagline at the bottom. However, once the studio quickly decided on a release date, they had the posters manufactured with Coming May 25, 1983 to your galaxy information added. If you’re familiar with this poster, you know it has a history of being among one of the most bootlegged posters in the “Star Wars” saga. One characteristic of the bootleg/reproduction posters is identified by the bottom right corner around the 20th Century Fox logo. The bootleg version has a lighter tone-the black ink fades to a dark gray. Others have what appear to be “fold lines” on the body of the poster, even though it’s rolled and was never folded. However, there are posters from that era that are rolled, which makes them much more valuable and desired among collectors. Other fakes have an off-set appearance to them, some have blurry images and text and the 20th Century Fox logo at the bottom has a washed out/no color appearance. This is an genuine, studio-issued poster. It’s in Near Mint/Mint condition. I’ve been collecting movie posters and memorabilia for over 35 years. I’m a very strict grader and this poster is in exceptional condition. There is no presence of it ever having been used… There are no pinholes, tape, tears or missing paper. The colors are bold and vibrant. Edges are clean and crisp. Please see all photos, as they accurately represent the poster you’re purchasing. This poster comes from my vast “Star Wars” memorabilia collection. It was initially rolled when I acquired it over 30 years ago, however, it’s been stored flat in an acid-free printer’s proofing box that I have from when I worked for a well known advertising publisher. It comes from a smoke-free, pet-free and climate controlled environment. This poster is an excellent investment piece, perfect for “Star Wars” fans and original movie poster collectors and enthusiasts. Additional photos can be taken and supplied if requested. Thanks for your interest! The item “REVENGE OF THE JEDI ORIGINAL 1983 ROLLED MOVIE POSTER NEAR MINT/MINT STAR WARS” is in sale since Thursday, March 21, 2019. This item is in the category “Entertainment Memorabilia\Movie Memorabilia\Posters\Originals-United States\1980-89″. The seller is “steev2108xtq” and is located in Philadelphia, Pennsylvania. This item can be shipped to United States, Canada, United Kingdom, Denmark, Romania, Slovakia, Bulgaria, Czech republic, Finland, Hungary, Latvia, Lithuania, Malta, Estonia, Australia, Greece, Portugal, Cyprus, Slovenia, Japan, China, Sweden, South Korea, Indonesia, Taiwan, South africa, Thailand, Belgium, France, Hong Kong, Ireland, Netherlands, Poland, Spain, Italy, Germany, Austria, Bahamas, Israel, Mexico, New Zealand, Singapore, Switzerland, Norway, Saudi arabia, United arab emirates, Qatar, Kuwait, Bahrain, Croatia, Malaysia, Brazil, Chile, Colombia, Costa rica, Panama, Trinidad and tobago, Guatemala, Honduras, Jamaica, Viet nam, Uruguay.
This entry was posted in revenge and tagged jedi, mintmint, movie, original, poster, revenge, rolled, star, wars. Bookmark the permalink.