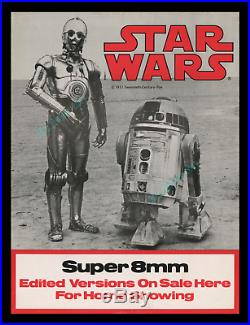 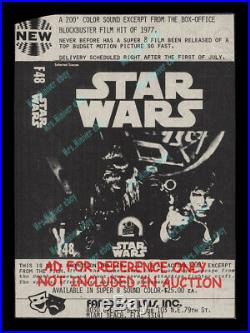 MUST HAVE STAR WARS! 1977 ORIGINAL ADVERTISING POSTER! Here’s one of the most interesting and important Star Wars advertising pieces: An Original 1977 Store Display Movie Poster for home Super 8mm showing! Many people have argued with me about this, but I remember it well, as I was one of the first people to get the digest version back in the summer of 1977. I saved the original ad, which proves indeed that it was released that early on – when Star Wars was still playing its first run at the roadshow cinemas. I’ve posted a photo of the super-8 ad I saved – it’s for reference only – the actual ad is NOT included with this poster. The Super-8 digest films were among the first Star Wars products licensed by Lucasfilm. The film was released nationally. That’s why they were available so early on. Kenner Toys Action Figures weren’t even produced until 1978. Stores like Sears and Roebuck had racks of then. This poster was made to advertise such displays. It’s one of my personal favorites, and I have over 3000 different Star Wars posters! It’s also one of the RAREST! This poster is simply as rare as any Star Wars poster gets. Heck, it’s pretty much as rare as any poster gets – period! In over the past 40+ years of collecting Star Wars posters, I’ve only seen a select few – less than a handful – of these originals! There are one hundred year old Toulouse-Lautrec posters that are not as rare as this poster. That’s a fact. This poster was issued 20 by 15 inches. The poster was designed and printed WITHOUT a white border. They call that a full “Bleed” in the advertising industry. This original is in. VERY FINE+++ ROLLED NEVER FOLDED UNRESTORED ORIGINAL CONDITION! So you can see just how terrific this baby truly is! If you’re looking for an investment/museum quality poster, look no further. Original Music Mark Hamill…. Luke Skywalker Harrison Ford…. Han Solo Carrie Fisher…. Princess Leia Organa Peter Cushing…. Grand Moff Tarkin Alec Guinness…. Ben Obi-Wan Kenobi Anthony Daniels…. Darth Vader James Earl Jones…. It can crash regardless of any decision you make and can even crash regardless of any decision made by the company related to the stock – Leaving you with a near worthless piece of paper that won’t inspire anyone! The magnificence of art and historic documents have an inherent value that relates to civilization and society. This poster is definitely ECONOMY PROOF! FOR MOST ITEMS LISTED. Please write with any questions. If you’re in the market for top quality original vintage movie posters or Star Wars, then please. The item “Star Wars SUPER-8 Store Display MOVIE POSTER AUTHENTIC 1977 ROLLED ORIGINAL” is in sale since Tuesday, July 14, 2020. This item is in the category “Entertainment Memorabilia\Movie Memorabilia\Posters\Originals-United States\1970-79″. The seller is “mrs.miniver” and is located in Studio City, California. This item can be shipped worldwide.
This entry was posted in star and tagged authentic, display, movie, original, poster, rolled, star, store, super-8, wars. Bookmark the permalink.