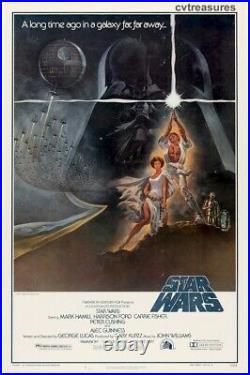 Original Vintage Movie Poster One Sheet (27×41). Here’s something you wont see often. Rare and Highly Desirable.. The Style A “First Printing” Star Wars One Sheet, Rolled, with Ratings Box! Amazing UNUSED Rolled Condition! Of all the Star Wars movie posters created for this Sci Fi legendary film, this style A has always been the most desirable with its spectacular artwork and graphics by Tom Jung. Original Star Wars style A one sheet from this 1977 classic. With the well known proof of authenticity mark, the “union stamp” at bottom. And, NO “Hair line” on Luke’s belt, which IF present would indicate a “pirated copy”. NOTE: And if this FIRST PRINTING doesn’t excite you enough, it gets even better! Because this Authentic gem is ROLLED! WHY is that so significant? Because prior to 1980, 95% of all one sheets were folded including these Star Wars one sheets, which means most all had the horizontal and vertical fold lines going through the images. And the ONLY way to diminish the fold lines is via professional restoration and linen backing. BUT, as you can see on the enlargeable images above and below, this Incredible 100% UN-Restored find has NO FOLD LINES! ALSO, making it even or Rare is this poster has the Ratings Box, which was removed after a short run of the posters, being replaced with posters with No Ratings box. Condition: This historical Sci Fi one sheet movie poster is in Near Mint-Mint condition. It is in completely UN-Restored, ROLLED UNUSED Condition. We are seeing these 1977 Star Wars posters skyrocking in value every year. See enlargeable images above. Background on the Style A “Star Wars” One Sheets. One of the most coveted of all Original Star Wars movie posters is this Style A “First Printing” one sheet. There were Four known printings, most of the one sheets released were from the 3rd and 4th printings, with the 2nd being more rare, and the most rare of all, the First Printing. The most obvious differentiation is the FIRST PRINTING has across the bottom border “one sheet – style A” and the NSS number as “77/21-0″. The following 2nd, 3rd and 4th printing just have 77/21. See enlargeable images above and below. The intense and even obsessive Star Wars fan base has made this one of the best investments in the world of collecting. With tremendous appreciation value. Star Wars (20th Century Fox, 1977). First Printing One Sheet (27″ X 41″) Style A. Starring Mark Hamill, Harrison Ford, Carrie Fisher, Alec Guinness, Peter Cushing, Anthony Daniels, Kenny Baker, Peter Mayhew, David Prowse, and James Earl Jones. Directed by George Lucas. Please see full-color, enlargeable image above and below for more details. Artwork by Tom Jung. Rolled Near Mint Condition! “STAR WARS” STYLE A ORIGINAL 1977 ONE SHEET MOVIE POSTER. VERY RARE ROLLED Condition! Original domestic release 27×41 poster No. Due to the immense popularity of this movie, there were four different printings of this “Style A” one-sheet poster. MOST of these posters were released folded and a Very Small percentage were rolled (like maybe 1%), the poster we are offering is rolled. Printed on heavy glossy paper stock. The first printing (the poster offered here) has the original NSS number of 77/21-0, while the next three printings have the 77-21 NSS number. The first three printings all have “Style A” printed in the bottom border, while the fourth printing does not. Soundtrack is mentioned in relatively small print but not the later edition that was produced for record stores. There are no stray black lines near Luke Skywalker’s belt (which would indicate a Pirated copy). Poster features great art by Tom Jung of Luke and Princess Leia in dramatic pose w/his lightsaber pointed to the sky. Images of C-3PO and R2-D2 appear behind them, interesting in that this poster features their initial designs and not final film designs. Darth Vader appears in bkg. Alongside fleet of spaceships approaching the Death Star. Guaranteed Authentic Original for Life. Note Cvtreasures stamp NOT on original. This item is in the category “Entertainment Memorabilia\Movie Memorabilia\Posters\Originals-United States\1970-79″. The seller is “cvtreasures” and is located in this country: US. This item can be shipped to United States, China, Japan, Brazil, Canada.
This entry was posted in star and tagged first, movie, poster, printing, sheet, star, style, vintage, wars. Bookmark the permalink.