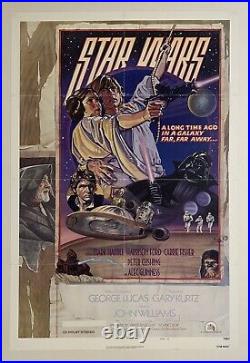 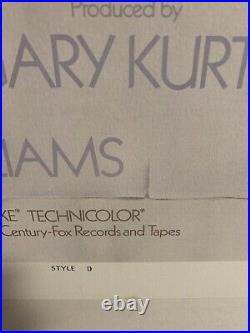 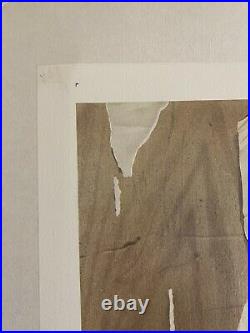 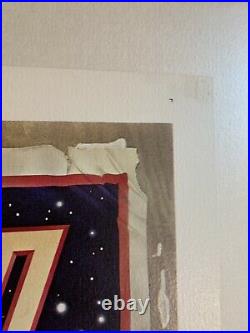 STAR WARS 1977 U. 1SH STYLE D “CRCUS STYLE” ON LINEN. Originally, a fully folded poster prior to linen backing. 27 1/4″ x 40 7/8″. Backed with all archival materials. Had small stain bottom border. Small stain in top corners as if tape had been there at some point. Fold lines still visible. No touch up paint applied whatsoever! What is linen backing?? Linen backing is a reversible process using all archival materials and it is the primary way that movie posters are conserved. The poster is mounted on to “linen” which is actually a combination of acid free Japanese Masa paper and 100% cotton duck. The paste used is a wheat starch paste which has been buffered to reduce the future acidity of the poster, part of the conservation. Prior to be mounted on the “linen”, the poster will take a bath. What’s in the bath depends on the condition of the poster. The poster will be deacidfied, washed, and in some cases, bleached! Posters by themselves are relatively fragile and can become victims to the aging process. (Becoming acidic, yellowing, becoming brittle, etc). Linenbacking greatly slows this process. Additionally, linen backing physically stabilizes the poster, making it much easier to handle, to display, or to store! Also, posters made prior to the 1990s were almost all folded when they were mailed to the movie houses. These fold lines will be flattened out during the linen backing process, and many of the fold lines themselves will become invisible. However, on worn posters, the posters will be flattened, but the fold lines will almost always be visible. Repair and restoration: Many individuals will use paints brushed and airbrushed onto their posters to make corrections. They will also fill in tack and staple holes. In more complex restorations, missing pieces of the posters can be filled in. 99% of my posters are NOT touched up whatsoever. This is commonly called linen backing the “European Way”. I personally like posters that way. I believe that little bit of patina adds character to the poster! Also I know the poster is still in its 100% ORIGINIAL state! Linen backing double sided posters: Most posters from the 1990s to the present are double sided. That means there’s an image on the front and a reverse image on the back. This is because these posters are meant to be displayed in light boxes. A modern poster is still a fragile item. Linen backing solves that problem while also providing conservation of the poster! I will say that backing a double sided poster is MUCH more difficult than the older posters. Most modern posters are clay based and also seem to be printed in a million different ways. Sometimes they do not survive the bath. Also, while mounting, the posters seem to be prone to wrinkling and occasionally bubbling! This is why you’ll find very few professional linen backers willing to back modern posters. In concluding: Collecting and displaying movie posters has been a fun hobby for me. I feel linen backing is the final stage in a posters life. It has gone from printers, to distributors, to the movie houses, and eventually made way into my collection. I don’t feel as though a poster is in its final collectible stage until it has been linen backed. At that point, I know the poster is safe, manageable, and is going to last many, many, many years! I hope this has been informative. Have fun and enjoy your art! This item is in the category “Entertainment Memorabilia\Movie Memorabilia\Posters\Originals-United States\1970-79″. The seller is “65tripower” and is located in this country: US. This item can be shipped to United States.
This entry was posted in star and tagged crcus, linen, star, style, wars. Bookmark the permalink.