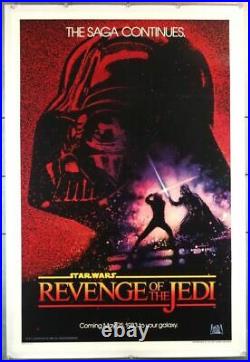 20th Century Fox Original Recalled Advance One-Sheet Poster (27×41) Linen Backed Very Fine. Original 20th Century-Fox 1982 2nd Advance Poster (27×41) for Richard Marquand science fiction epic, STAR WARS: EPISODE VI–RETURN OF THE JEDI (1983) starring Mark Hamill, Harrison Ford, Carrie Fisher, and Billy Dee Williams. This film is the final segment of the original trilogy that included STAR WARS and THE EMPIRE STIKES BACK, and originally the working title of the film was REVENGE OF THE JEDI. The first advance poster did not have release date at the bottom of the poster, but this second advance poster did have the release date. By the time of its production, George Lucas and his cohorts at the Industrial Light and Magic Company had truly perfected their special effects craft. Sensational effects include floating barges, incredible creatures, airborne cycles, death ray machines, and light sabers. We see the progression of the character of Luke Skywalker from whinny teenager to impatient student to enlightened warrior. Luke also reaches a final reconciliation with his father Darth Vader. This rare, recalled advance poster was originally folded, as almost all of these posters were. The native condition of the poster was very fine. We have had the poster linen-backed. The native condition of the poster before backing was very fine. We have had it backed mostly for reasons of presentation. The poster now presents beautifully. MovieArt Austin does not sell reproductions. RICHARD MARQUAND – Director Harrison Ford 1 – Actor Mark Hamill – Actor Carrie Fisher – Actor Billy Dee Williams – Actor James Earl Jones – Sir Alec Guiness – Actor. Listing and template services provided by inkFrog. This item is in the category “Entertainment Memorabilia\Movie Memorabilia\Posters\Originals-United States\1980-89″. The seller is “movieart*austin*tx*usa” and is located in this country: US. This item can be shipped worldwide.
This entry was posted in star and tagged episode, jedi, return, star, wars. Bookmark the permalink.