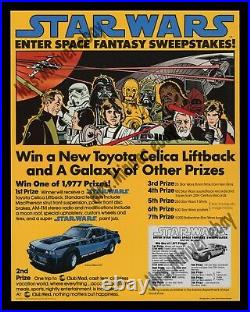 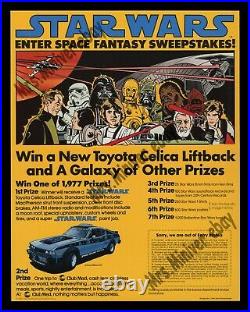 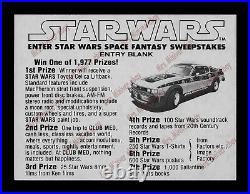 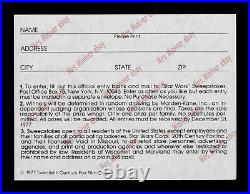 MUST HAVE STAR WARS! 1977 STAR WARS MOVIE THEATER DISPLAY!! Even some of the most hard-core Star Wars poster and display collectors don’t have this one! In 1977, when Star Wars was first released by 20th-Century-Fox, Toyota issued this RARE poster display to advertise a contest for a special Star Wars Toyota Celica car (Imagine what that car is worth today – if it still exists). Toyota placed these displays in movie theaters playing Star Wars. How do I know this? I know people that saw them at the theaters and entered the contest. Additionally, I now have an in-house poster made by Toyota that explains all about the contest and it specifically mentions that these displays were to go to the movie theaters playing the film. The Display is complete and comes with ten (10) of the ORIGINAL 1977 blank contest forms! It has a list of runner-up prizes on there too (see photos 3&4). The entry blanks have NOT been attached to the poster, so everything is mint! Early on, before Star Wars was first released, Fox had a very hard time getting merchandising products to tie-in with the film. Toyota was one of the only companies to do it, along with Wonder Bread and Ken Films Super-8 home products (all mentioned on this poster). Needless to say – once the film came out and became a sensation – a title wave of other companies joined them. This amazingly RARE 11×14 poster display was one of the first posters issued in connection with Star Wars, which makes it one of the rarest and most important pieces ever discovered in connection with the film. This particular surviving example was saved by the poster artist John Van Hamersveld himself. Van Hamersveld is credited on the bottom right of the poster. Van Hamersveld was one of the country’s premier poster artists. He rendered some of the most famous poster artwork ever created: The legendary poster for Endless Summer back in 1964 was his. However, Hamersveld’s most famous poster is known as “Indian, ” it was for Jefferson Airplane’s 1968 Pinnacle performance. It’s featured in the’Art of Rock’ book, along side his Pinnacle Shrine Jimi Hendrix Poster. He also did the art for the Beatles “Magical Mystery Tour, ” and, The Rolling Stones “Exile on Main Street” 1972 album cover, as well as the Kiss “Hotter Than Hell” album cover – just to name a few, so no question, this is an important piece for a host of reasons. This amazing original is in SOLID Mint/NearMINT original unused condition. I’ve posted a high-resolution direct scan of everything so you can see just how nice this little gem of a display really is. Ben Obi-Wan Kenobi Anthony Daniels…. It can crash regardless of any decision you make and can even crash regardless of any decision made by the company related to the stock – Leaving you with a near worthless piece of paper that won’t inspire anyone! The magnificence of art and historic documents have an inherent value that relates to civilization and society. These poster are definitely ECONOMY PROOF! Please write with any questions. If you are in the market for top quality original vintage movie posters or Star Wars, then please. This item is in the category “Entertainment Memorabilia\Movie Memorabilia\Posters\Originals-United States\1970-79″. The seller is “mrs.miniver” and is located in this country: US. This item can be shipped worldwide.
This entry was posted in star and tagged blanks, celica, display, entry, movie, poster, star, sweepstakes, theater, toyota, wars. Bookmark the permalink.