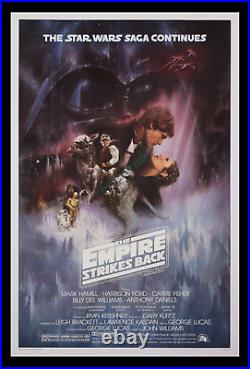 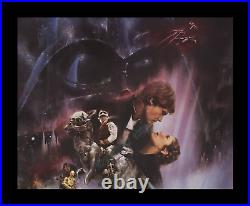 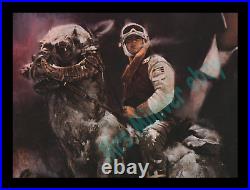 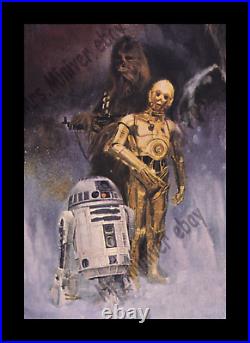 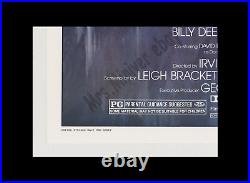 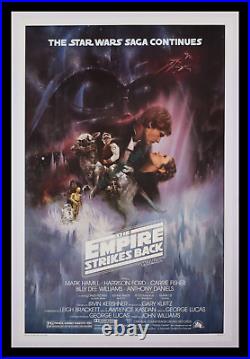 MUST HAVE STAR WARS! 1980 STYLE A GWTW ONE-SHEET! Here is one of the mainstay posters in the Star Wars collecting hobby: A BONA FIDE ORIGINAL. 1980 27×41 Empire Strikes Back Style “A” One-Sheet. This is one of the nicest and scarcest original posters on Star Wars. Originally referred to as the “Gone With the Wind, ” this artwork became known as the style “A” only by default. Billy Dee Williams questioned why he wasn’t pictured on it (along with all of the other billed actors) at the film’s premiere. 20th Century-Fox and Lucasfilm didn’t have a good answer to Williams’ surprise inquiry, leaving both studios standing there with a mess of egg splattered all over their faces. They scrambled quickly to issue the style “B” artwork with a small but clear image of Lando Calrissian, Billy Dee’s now famous movie character. This glorious style “A” artwork was then immediately suspended – both companies dropping it from their primary campaigns to avoid any chance of undo publicity – rendering the “Gone With the Wind, ” gone with the wind. THIS IS 100% GUARANTEED ORIGINAL RARE 1980 PRINTING. This is one of the few original 1-sheets that was issued to the theaters ROLLED before all the Billy Dee hubbub. It was issued by 20th Century-Fox directly. I was lucky enough to get this beauty, way back then, over 40 years ago! I’ve personally held it until now. Hopefully, some lucky new owner can enjoy it for the next 40 years. I ONLY sell genuine rare originals. This fantastic rarity is in NearMINT ROLLED NEVER-FOLDED CONDITION!! If you’re looking for a clean one, and who’s not, this would be it! It’s recently been gloriously museum linen-mounted by the best conservator in the USA. All 100% archival materials were used! This poster was CLEAN prior to backing. It was backed because, increasingly, a lot of my buyers have requested linen-backed posters so they won’t damage the original when framing it. Let’s face it, if you’ve looked – then you’ve learned – this poster is HARD to find in clean ROLLED NEVER-FOLDED condition!! Almost all of these are now screwed up in some kind of significant way. This one is not. LINEN-MOUNTING is an accepted form of poster preservation by the Library of Congress and every Museum in the country. A lot of advanced poster buyers request and prefer linen-mounted posters because it makes framing and displaying the posters much easier. Without the risk of damaging the original. The white you see in the photo beyond that of the poster (see photos #3&4) is the white of the Japanese paper lining the linen border margin. You can see how easy it would be to damage the original poster without that extra margin of protection. The backing makes the poster much safer to handle. It GREATLY reduces the risk of damaging the original. Also, all of my linen-backed posters have been stored FLAT so they. DO NOT have a curl to them. They’re ready for framing and display! It will re-flatten out in a day or two if you store it flat again or frame it. Original Music Mark Hamill…. Luke Skywalker Harrison Ford…. Han Solo Billy Dee Williams…. Lando Calrissian Carrie Fisher…. Princess Leia Organa Peter Cushing…. Grand Moff Tarkin Alec Guinness…. Ben Obi-Wan Kenobi Anthony Daniels…. Darth Vader James Earl Jones…. It can crash regardless of any decision you make and can even crash regardless of any decision made by the company related to the stock – Leaving you with a near worthless piece of paper that won’t inspire anyone! The magnificence of art and historic documents have an inherent value that relates to civilization and society. This poster is definitely. Please write with any questions. If you’re in the market for top quality original vintage movie posters or Star Wars, then please. This item is in the category “Entertainment Memorabilia\Movie Memorabilia\Posters\Originals-United States\1980-89″. The seller is “mrs.miniver” and is located in this country: US. This item can be shipped worldwide.
This entry was posted in star and tagged back, empire, movie, never-folded, nmrolled, poster, star, strikes, wars. Bookmark the permalink.