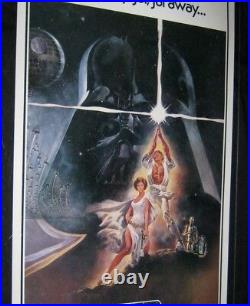 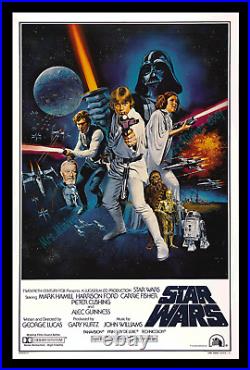 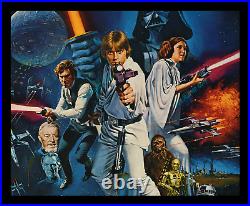 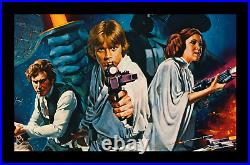 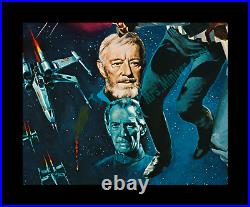 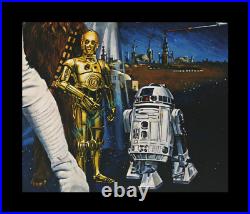 MUST HAVE STAR WARS! OK – Here it is. Star Wars Style “C” one-sheet Movie Poster. Finding a C9/C10 rolled never-folded original of this poster is nearly impossible in today’s collecting world. Almost all of the 27×41 inch style “C” 1-Sheets that surface have FOLDS, rips, or other defects. How do I know this? I’ve been fanatically collecting Star Wars posters since 1977 without a break. I’ve seen it all, and, in the all of my 45 years of collecting, I’ve only seen a small handful of. Original Style “C” one-sheets that are truly in. FOLDED UNRESTORED ORIGINAL CONDITION. This is one of them. Unfortunately, a group of scum pirate criminals printed and distributed about 100,000 bootleg copies of this poster, and so the unknowing collecting world has been perpetually confused as to authenticity. This is not one of those. I call those “the Energizer Bunnies of posters, ” because they keep on coming and coming…. Nevertheless, I’m not going to go into all one-hundred and one different ways one can to tell the original style “C” from the fakes (I’ll save that for my encyclopedia on posters), but I’ll point out the two big issues of pressing concern to most educated collectors. Have the infamous “HAIR” on Princess Leia’s back. It’s actually a hair (right at the base of Vader’s chest-plate on Leia’s back) that was caught in the duplication process when they photographed the original to bootleg it. It’s one of the bootleg’s most telltale signs – but – I wouldn’t solely rely on it. I’ve seen dubious people carefully scratch the “hair” off with a needle so it wouldn’t photograph in their listings. I found out about that trick the hard way, when I bought one that appeared not to have the hair. ” Talk about “criminal intent. I admit my prices may not appear not to be bargain basement giveaways. I say, “appear” because it’s my sincere belief that it’s a bargain to be certain in what you’re getting. Certainty is what all the fuss is about when it comes to certifications on autographs, baseball cards, and comic books. It’s what all three of those collectable industries solely rely on. I’m a well-known expert. I fully designed and authored a Star Wars poster-collecting guide back in 1999 – It was published by Butterfields. I’m credited in the front of the guide. I offer that guide with some of my listings see a photo of it in my listing with. STAR WARS ADVANCE 1977 HERALD FLYER SET in the title. I point this out because I want you to know that I can definitely authenticate Star Wars posters with 100% accuracy. THIS POSTER IS THE REAL DEAL. Also, it’s important to BEWARE of any dealer who advertises a Star Wars poster as a bootleg. These are greedy dealers who think it’s OK to destroy the hobby by circulating bootlegs because they tell you upfront that it’s a bootleg. That’s just wrong. They’re knowingly distributing bootlegs for personal profit. It’s criminal and unscrupulous. Some poster masterpiece sellers think it’s OK because they say they stamp the back as fake. It’s NOT OK. It’s again, distributing bootlegs knowingly. That’s NOT integrity – that’s BUNK! I wouldn’t trust them unless they stamped the FRONT of the poster with a mark that clearly states, BOOTLEG! – like they do with fake coins and currencies in that well-established hobby. Help stop this criminality – speak out! As I pointed out above, this one-sheet is. You’ll NOT find a better one. It’s been stored in a flat-pack between acid free paper for more years than I can remember now. This hasn’t seen the light of day and is SHARP! Most of my buyers want the posters linen-mounted, but I know there are a sect of collectors out there who are purists and want everything untouched and in the best condition. THIS IS FOR YOU! This poster is class all the way! Original Music Mark Hamill…. Luke Skywalker Harrison Ford…. Han Solo Carrie Fisher…. Princess Leia Organa Peter Cushing…. Grand Moff Tarkin Alec Guinness…. Ben Obi-Wan Kenobi Anthony Daniels…. Darth Vader James Earl Jones…. It can crash regardless of any decision you make and can even crash regardless of any decision made by the company related to the stock – Leaving you with a near worthless piece of paper that won’t inspire anyone! The magnificence of art and historic documents have an inherent value that relates to civilization and society. This poster is definitely. Please write with any questions. If you are in the market for top quality original vintage movie posters or Star Wars, then please. This item is in the category “Entertainment Memorabilia\Movie Memorabilia\Posters\Originals-United States\1970-79″. The seller is “mrs.miniver” and is located in this country: US. This item can be shipped worldwide.